So, summer is officially over and students are flocking back to universities all over Aotearoa/NZ. Well, unless you’ve been gated by one or more of the fresh new tertiary education policies pushed out by our Minister for Education, What-the-Hekia Parata, over the summer break. (see Holly’s excellent post on that here.)

I’m acclimatising to a new city and a new campus, and thus, here is an O-week post about the Greens on Campus Waikato. We’ve already met for some KOA action (of which others have posted much more than I this summer, so I won’t go over it again) and we’re just starting on the new “I’m in for the future” campaign to run through 2013.

They’re a keen bunch; Waikato holds the record for sustainability initiatives being put in place earlier than any other campus in Aotearoa/NZ, has some of the flashest recycling bins scattered around the campus I’ve seen anywhere, and environmental science/common sense is ingrained in the University administration.
Looky here, a whole page about the environment on the academic website!

So when campus Greens said they wanted to erect a geodesic dome, WSU said, “sure”. 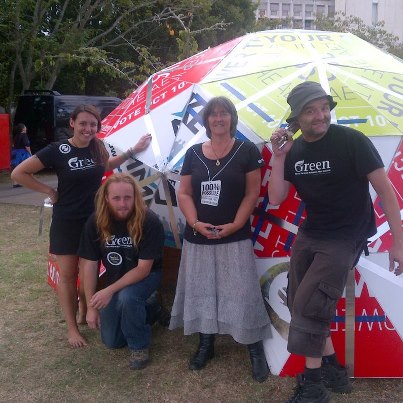 The stall was not adjacent to the dome, which is made of recycled coreflute billboards from the 2011 election campaign, so there was a bit of to-ing and fro-ing to keep checking on it and answering questions from bystanders.

Greens on Campus co-convenors Theresa and Amy had organised a really good stall kit, and as we set up at 9am, it all went up very quickly. ‘Many hands make light work’ was truly the order of the day as first the stall, then the geodesic dome were set up.

It was our privilege to have Green MP Cath Delahunty with us for the day, which flew by as we conversed with students, handed out stickers, leaflets and cake, and signed up new and old members to the club. 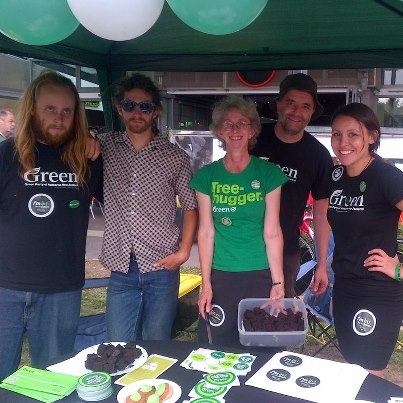 Today held a brighter event for me, and for many of the past members of the Greens-at-Vic club, the Young Greens wing of the Green Party, and a whole lot of Greenpeace activists.

At 5.45pm promptly, just after the Speaker, the Hon Lockwod Smith, had regained his seat, Gareth Hughes began his first speech in Parliament. He made much of his status as the youngest MP in the House, but also gave a pretty good overview of where he’s been since he was an 18-year-old Gisborne boy-racer who liked his hamburgers.

The galleries were crowded with family, friends and collegues and most of us trooped in an orderly fashion over to the Green Party floors in Bowen House for a speech or four, some waiata and a few drinks and nibbles with our new ‘man about the House’. Young Arlo Hughes, much referred to in the Speech, amused all of us during the reception speeches by piping up and interjecting, whilst providing the floor-show.

The text to Gareth’s speech is here.

And in usual form, here’s some crowd shots of the reception!

Keith Locke amid a crowd 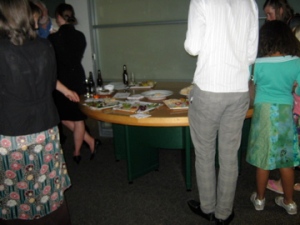 Gareth heading for a beer 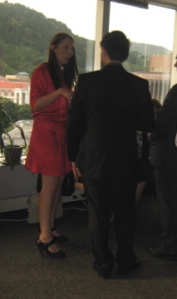 It’s half way through my fourth day in Copenhagen, and I know I’m in the time zone because I am starved and it’s actually lunchtime!

We had an awsome march through Copenhagen yesterday. Four and a half hours across town with 100,000 people from around the globe. Jeanette, Kennedy and I marched with the New Zealand Youth Delegation (NZYD) and hundreds of representatives from Green Parties around the world. It was magic.

The NZYD had a huge NZ America’s Cup spinaker with youth delegate signatures scrawled all over it. We marched around and under it, with dozens of kind strangers helping us keep it aloft.

On the sobering side, we are at that part of the conference where everyone is pessimistic and confused. The draft texts floating around since yesterday have made everyone angry. This is typical at such conferences, I am told.

The Annex 1 countries attempts to kill off Kyoto entirely seem to have failed, but the developing world is pissed. Funny that!

Some of what NZ is demanding has survived the first cut and is still in the draft text. We’ll see how they do this week.

Meanwhile, I am at the KlimaForum, the “People’s Climate Forum”, where alternative, sleeves-rolled-up discussions are happening between people who know that our leaders are only serving the interests of economic growth – not saving humanity from climate change.

It’s not the planet we need to protect. It will be here long after we humans have consumed ourselves to extinction.

Here is a video I shot of the Young Greens co-leaders during the march yesterday. Enjoy it, and share it around!

By the time I got there, the Backbencher pub was packed, with more young student politicians than I’ve seen in a room together for a long time – a table packed with VUWSA/NZUSA types, and luckily, a few feminists of my acquaintance, who offered me a seat with them. Having dropped my bags on the chair, I jumped back up to speak to Wellington Central MP Grant Robertson, who introduced me to Chris Hipkins, new MP for Rimutaka – someone I remember from his years in VUWSA, far too long ago! Along with panelist Jacinda Adern, that was 3 new MP’s in the room, and the Labour support crew were very voluble.

The scene was set for a lively debate – the Young Nat’s represented by their president, Alex Mitchell; Jacinda Adern fronting for Young Labour; Kimo Winiata representing the Maaori Party; and Gareth Hughes, recent contestor of Ohariu electorate, for the Young Greens. Presenter Wallace Chapman reeled out the questions, and kept the pace moving in-between the recorded clips pasted into the programme.

Various funny things happened – one stunt, involving a ‘prize’ framed photo of John Key, fell flat when someone was asked to name Phil Goff’s deputy; having correctly answered ‘Annette King’, he then vociferously turned down the ‘prize’, at which point a voice yells from the back “I’ll have it!”, and along comes Joel Cosgrove, recent past-President of VUWSA, to claim John key’s photo – stunning Chapman into reading out the caption on his (Workers’ Party campaign) t-shirt. Just watch the video on-line, it’s priceless footage.

At intervals, Chapman repeated to the assembled (mostly) students, how great it was to have such a good crowd, and please come down for the next 4 weeks, until the last episode of the season.
Info about the show here.

And since they were looking so photogenic, I’ll add some pix:

the panel, being wired for sound

View of the crowd as filming begins

'the bogan from Gisbourne'

Well, I said I’d be a small green blur, and I was, although not as quick a mover as MP Sue Kedgley, who was up and about much earlier than I, in company of a stalwart team of young greens.
I joined them by the Kelburn viaduct, where we waved banners at traffic for a while, and read the Herald advert, passing the paper around the group. I was absolutely blown away by the power of that bank of images – go the clever person in the Campaign Team who came up with that, it’s a million-dollar montage!

Then we caught a bus down to Manners Mall, leafletting to passersby, and waving banners at the traffic, at the same time. Some innovative juggling went on there! Sue shot back to Midland Park for a while, and some of us peeled off to do other tasks.

I caught up with them again on the Pub Crawl, a valiant attempt to get rid of more coasters, stickers and fliers of various sorts, which started at The Occidental, progressed to The Black Harp, The Featherston, along to Arizona Bar, then down through Chews Lane to the Malthouse (?) and on towards the Backpackers in Wakefield St, then up Cuba St to our eventual destination, Mighty Mighty.

All that without stopping for a drink, which we made up for at the Mighty.
After a bit of social chill-out, I left to catch my bus home, while the youngsters carried on to get rid of a large green bag full of campaign materials…

Happy Election Eve, everybody. Seeya at the partee tomorrow 🙂

Warm-up for this event began in the Green Party Bowen offices, with a social atmosphere to Friday night drinks bringing in Russell and Meyt to have a glass of wine (or two), and discuss current issues as the room filled up with the YG’s who were coming on the crawl. Lots of wee side discussions kept us there ’til after 6pm, as the crew arrived in ones and twos.
Delicious pizza was provided, as our responsible hosts made sure that campaigning Young Greens were also sufficiently well-fed to be able to walk our talk around the Capital City’s CBD bars. Gareth Hughes, the indefatigable youth outreach co-ordinator, and a candidate himself, marshalled everyone down the lifts and out into the clear, starry night.

Our first stop was The Occidental, a favourite of lawyers, political staff and journalists, although it appeared to be a mixed crowd of after-work and more casual friday night drinkers. The staff gave us the thumbs up to offer coasters to the patrons, even posing for a photo with a few coasters themselves!

Vic Greens YG's in the Occidental

Then we carried on down Lambton Quay, deciding to head towards Featherston St, and split our group in two, half visiting Leuven, half going into the Black Harp.
This was our starter for quick forays, just popping a few coaster on tables, without getting into long discussions with bar patrons.

After a re-group, we then wandered onto the wharf and checked out One Red Dog, discretely coastering outside tables as we went around the Loaded Hog/Red Dog complex, and then moved on past Shed 5, towards the Events Centre.
At this point, most of the group was headed towards Mac’s Brewery, near the NZX building, but a couple of us peeled off to have a quick look at the WOW! exhibitors, and some stilt-walkers in amazing costumes who were strolling the area under the sails.

Very exotic, I may do a post about WOW! displays later in the weekend, as there are wandering WOW! exhibits scattered around Welli for the next few days & I may get some more pix to show.

We scooted along by Frank Kitts’ Park & caught up with the others, and a quiet drink and some debriefing and reflection on the campaigning ensued.
I thoroughly enjoyed the opportunity to catch up with Tara Forde, Green Community Board rep, up from Golden Bay for the weekend, and we both loved the irony of sitting a stone’s throw away from where an anti-war stunt in 2005 saw us ‘bonding’ with some 20 of our peers in activism.
We finished the night by strolling up Cuba Mall, her to find Mighty Mighty where she was to meet a friend, and myself to walk on to another friend’s birthday party.

I suspect that this may become a YG feature for the next few weeks of the campaign, everyone seemed to enjoy the experience, and it was a great change from street-leafletting and other forms of election-campaign behaviour used in the past.