SkyCity casino boss Nigel Morrison claims problem gambling is damaging to the casino and that “we are not in the interest of taking anyone’s rent money”.

So why does SkyCity run a problem gambling creation scheme called Premier Rewards?

Premier Rewards is basically a loyalty card. The more you gamble, the more points you get. You can redeem your points on free carparking at SkyCity, and in SkyCity’s restaurants and bars, staying at SkyCity’s hotel and, of course, on more gambling.

There are three categories of card: Ruby, Sapphire and, for the biggest gamblers, Gold. The more you gamble, the greater the range of things your Premier Rewards card will purchase as you move to a higher category of card.

Louise Upston might be interested to note that the closing date for submissions, set by Sam Lotu-Iiga as Chair of Parliament’s Social Services Select Committee, was actually last Friday. Yes, her colleague Sam Lotu-Iiga allowed only 11 working days for submissions on this Bill, and Upston obviously doesn’t realise this.

There is already disquiet about the lack of time for democratic input on this Bill. So come on, Louise – you were obviously blindsided by the short deadline too. So have a chat with your colleague Sam, and get the deadline extended by a couple of weeks so people’s voices are heard.

Julie Anne Genter is a transport heavyweight. She’s got all the academic qualifications and consultancy  experience to know what she’s talking about as far as transport is concerned. Gerry Brownlee is a heavyweight too, although his most admirable qualification in that regard appears to be his loyalty to the National Party and his being prepared to take one (or two, or three) for the team.

So here’s how they shaped up in 3 rounds of sparring in Parliament last week:

Big points win to Julie Anne.  We have the long Easter recess for Parliament now, but I suspect when it resumes Julie Anne will win by TKO.

We Greens support non-violence, so however big and ignorant the opponent is, we still need to leave him or her with some respect. So no KO leaving Gerry convulsing on the canvas – although I’m sure you could do that, metaphorically, should you choose, Julie Anne.

The Nats usually look after their own. Hey, they defended Bill English’s housing rort until it became politically indefensible, and he “voluntarily” surrendered his allowance as a purported out-of-Wellington MP.

So you would expect the Nats to be rushing to back up Judith Collins’ defamation suit against Radio NZ and two Labour MPs with some public money.  And all the speculation over the last few days is that they would.

Nek minnit, it is revealed Collins didn’t even apply to Cabinet for funding.

The Cabinet Manual requires that Ministers discuss public funding of legal action with the PM before approaching Cabinet.

My bet is that Key told Collins “no way”. And not out of some concern about public funding of what appears to be a private lawsuit, but because Collins is in the wrong Nat faction. She is ambitious, and she would like Key’s job, which Key would obviously like to keep, just for a little while at least, until he is assured of a significant place in history.

Then we have the backroom players: Michelle Boag and Bronwyn Pullar on Key’s side; and Cameron Slater and Simon Lusk on Collins’ side. And poor old Nick Smith gets caught in the crossfire for inappropriately taking sides.

It is a grand political game, worthy of the English landed gentry (anyone want their moat cleaned?)

But aren’t we forgetting some people here? While the various inquiries circle around which Minister or which ACC official may have done something wrong, no inquiry is being launched into the plight of the ACC claimants who have been wronged by the pernicious, and arguably unlawful, policies of ACC that are designed to deny them cover and entitlements.

While other parties close their ears and play the political games, only the Green Party considers the plight of wronged ACC claimants to also be a political issue.

There is a parallel story to the ACC scandal that has already cost Nick Smith his Ministerial career, and may well cost other Ministers or senior public servants theirs.  It is a story that no-one apart from Kevin Hague appears to be telling.

That is the story of how ACC claimants are being treated (or mistreated) by ACC. I am not necessarily convinced Bronwyn Pullar’s motivations are honourable, and they may well have much  to do with personal gain, rather than a genuine attempt to address how the system fails ACC claimants.

But as someone who has for many years assisted ACC claimants, including taking cases to review and appeal, I can verify that many of the concerns Pullar expresses in her list (published in the frogblog post from Kevin Hague I have linked to above) are genuine concerns about ACC practices and culture that require investigation.

A good number of them were raised in a report from an inquiry completed by Judge Peter Trapski as far back as 1994. But nothing has ever been done by successive Labour and National led Governments to address them, and the issues, as far as ACC claimants are concerned, fester on.

Don’t get me wrong, I’m all for hounding out the National Party corruption and cronyism going on here, and for addressing what appears to be appalling information privacy practices by ACC.

But just as important is ensuring the very serious concerns about the way claimants are treated by ACC are addressed. Good on Kevin for focusing on that. I hope some MPs from other parties will follow his lead.

Went to visit my Mum today, exchange Christmas presents, and shout her for lunch in Pukekohe. She is 90 years old, and doesn’t feel confident about driving the motorway  anymore, so she can’t get to our family Christmas because there is no public transport available to her on Christmas Day.

So for the last few years, we have had our pre-Christmas catchup, and she has then shared Christmas Day with friends who live locally to her.

Anyway, what a drama getting there today!  I live in West Auckland. My partner and I have one car between us, a decision we made in the interests of ecological sustainability. My partner had to work today and needed the car for that, so that option was out.

To get to Pukekohe by mid-day, I had to negotiate two trains and bus replacements between them, and that meant I had to leave home well before 10am.  Same on the way home, so for just over an hour and a half with my Mum in Pukekohe, I spent almost 5 hours traveling on trains and buses.

Surely the public transport system in Auckland can do better than that.

Congratulations, David, on being elected Labour Party Leader. Here are a few thoughts from a Green activist on how to best get an effective progressive Government after the next election:

Now MMP is locked in for our lifetimes, we have to get past the old FPP thinking. It is voting blocs that count now, not the dominance of one of the two old Parties.

Due to our silly Electoral Act, all comments from shortly after now until the polls close tomorrow will be held in the moderation queue.

This is because I don’t want to have to visit the Green Party’s General Secretary, Jon Field, in prison and explain to him why he is there.

People wanting to be teachers may soon have to pass a personality test to assess whether they are right for the job.

It’s one of the moves planned by National should it retain power after Saturday.

Education spokesperson Anne Tolley released her extensive education policy today which covers everything from plans for a new funding structure for the early childcare sector to clamping down further on people who take out student loans.

Schools know that because the Standards are so flawed, the level of moderation is so inconsistent, and implementation is so varied around the country, any student achievement data based on them is completely unreliable. It is unfair and dangerous for ‘National Standards’ to be used to compare and judge school performance, let alone as an accountability measure”.

NZEI is also concerned that National wants to shift the resourcing model to ‘incentivise school performance’ as it suggests that money will be removed from those schools which are not complying with ‘National Standards’ or are not performing against them.”

“More measuring doesn’t make the pig fatter and National’s policy will simply increase the bureaucracy in education without adding value to the people who matter – children.

David Farrar posted at Kiwiblog yesterday in response to a statement by Phil Goff on energy SOE privatisation:

On the face of it, that seems to be an argument that a listed privatised company delivers domestic electricity supply as cheaply or cheaper than the SOEs do. But what Farrar has done is cherry-pick only the November 2011 statistics from the Consumer Powerswitch website.

Here’s a chart from that site of the prices for the various electricity retailers to Dunedin over the last three years: 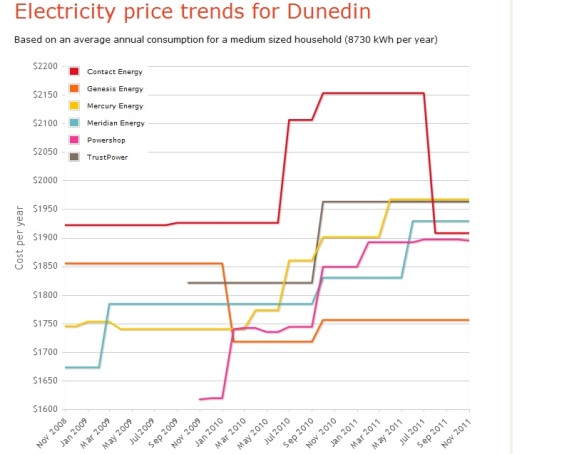 Contact actually had substantially higher prices in Dunedin than any of the SOEs for the entire period between November 2008 and August 2011.  It has been only the last four months that it has been (slightly) cheaper than Meridian and Mercury, but still significantly more expensive than Genesis.

Farrar also fails to take into account the pricing of Contact’s 100% owned subsidiary, Empower, which where it provides retail electricity supply has significantly higher prices than any of the three SOEs for the entire three year period (see links to Auckland, Wellington, and Christchurch prices above).

Farrar might be right to call out Goff on the $500 annual price differential he claims between Contact and the SOEs – that figure seems to me to have been either exaggerated or cherry-picked.

But to dogwhistle that privatisation will bring lower electricity prices is simply not supported by the evidence.

Incidentally, I’m somewhat suspicious about the sudden and dramatic drop in Contact’s domestic electricity prices from August 2011, just after National’s SOE privatisation announcement.  I’m wondering if this is a loss-leading exercise to gain market share before the SOEs are privatised.