Yep, it’s Wednesday again, and so there is another opportunity to be entertained and informed, whilst supping a beverage of one’s own choosing, by the inimitable Wallace and Damian. (not to be confused with Wallace and Gromit)

Topics include performance pay for teachers, and astronomical pay figures for public sector CEO’s .. are they worth it?

C’mon down, June is looming and we need to enjoy as much of this as we can before TVNZ’s overpaid CEO’s put a stop to it ….
Save TV7 petition here.

Update:
That was a very entertaining evening. Russel Norman was very well on form, and there was a huge support crew of Green staff, members and YG’s. Have a looky here for the episode, at TVNZ’s On-demand website. Worth looking at what else TV7 produces, if I may say so, since it’s about the only intelligent programming for grown-ups available in NZ free-to-air. 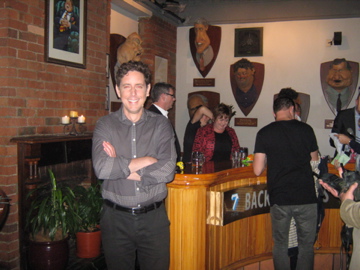 Wallace looking suitably chuffed at the end of the show!

The pub was as packed as I’ve seen it for a while (possibly since the last of the pre-election shows), and as Wellington had turned on a beautiful day, I suspect happy, well-sunned students were a large factor in the increased attendance. Oh, and that about half the audience was there to cheer Russ on!
There was a marked absence of the student wings of ACT, Young Nat’s, or even Young Labour, which was rather a surprise.