Haven’t done a post about Back Benches for a while. Not because I haven’t been attending (I have had the soggy overcoat to prove my dedication) but because other things going on in my life have interfered with writing posts for a while.

So here’s a compendium of reviews of the past two shows and a plug for the next one.

The first one (22nd Feb) was very busy, the bar was crowded and the topic in hand was the Christchurch earthquake anniversary. Christchurch MP’s were on the panel – Liane Dalziel (L), Nicky Wagner (N), Kennedy Graham (G) and Denis O’Rourke (NZ1). They had all been at commemoration events during the day in Christchurch, then flown to Wellington to be on the show, so kudos for that. The media coverage of the days events was pretty much wall-to-wall, and the MP’s referred to where they’d been under the assumption that non of the audience could possibly have missed seeing footage.

The following week was ‘leap day’, 29th Feb, and a re-shoot of the Hamilton show that didn’t get broadcast during the summer tour. The pub was barely filled, and I was surprised to be invited, with my young companion (a friend’s son) to move to another, closer table so that the cameras had some audience to film. So we did, and ended up sitting right next to National MP David Bennett’s wife and daughter, who both got spots speaking with Damian Christie. Other MP’s on the panel were Cath Delahunty (G), Sue Maroney (L) and Richard Prosser (NZ1). Students with or without jobs got a fair bit of airtime, especially given recent announcements by the Minister for Social Development during that week’s press on welfare reforms. 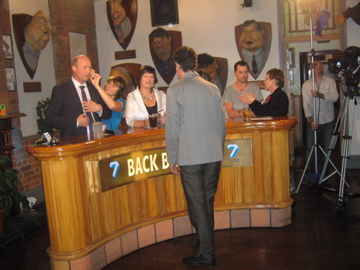 Pre-show shot of the panel with Damian and Wallace

This week 7th March, the line-up is Labour MP Rino Tirikatene, Dr. Cam Calder (Nat) and Denise Roche (Green) – still from 8pm if you want to get a drink beforehand, at the Back Bencher pub, opposite Parliament in Molesworth St, Wellington.
There’s been some good young Green crews along in the past, now that Orientation is on again, might be nice to get some more yoof down to the pub for a bit of a laff, eh?

Update
That was a very good night out, episode here and here’s a quick pic from before filming began showing all the panellists.

There’s still time to email TVNZ about saving TV7, have a look here.